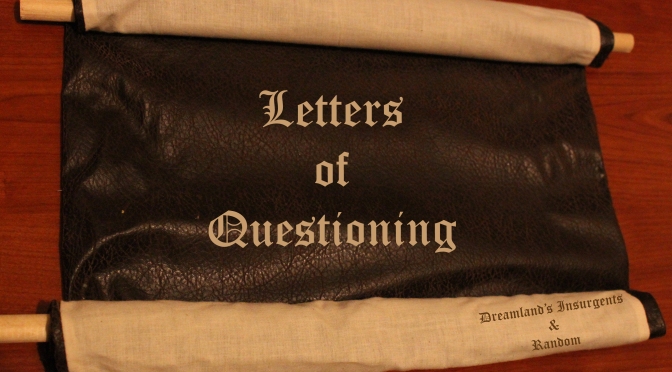 So last week you got to read a new installment to Letters of Questioning and I promised you my response to Dreamland’s Insurgents, and so here you have it!

Can you believe it has been over five years since our marvelous letters?!  The end of May, 2013 to be more precise!  Life, that silly thing that always seems to get between scholarly minds and their best of intentions.  I too am excited to see where this new phase will take us! The growth we have both found in that time, well I can only imagine that our letters would be that much more amazing!

You are correct my dear friend, as much fun as it would be to just “pick them up” from where we were, well, life has changed both of us, and we can only hope that is for the better!  I would have to agree that we will circle back around, as is the nature of life, to be cyclical and I, for one, can’t wait to see where that takes us!

I mean, I know it is overachieving to shoot for a new flash piece a day, but I mean… what else could I undertake? I was already writing every day for the past year, it seemed only logical to take it to the next step and produce small pieces of fiction each day. I think next year I should not set my sights so lofty and instead settle for a weekly piece, but something deeper than these little blips in time. That said, these little blips, this over-achieving would never be possible without the aid of “mere mortals” like you!  So no worries dear readers, you too can be an over-achiever all it takes is a little work and a bit of chutzpah!

I would have to say though that this has already been more than worthwhile. I have explored several different POVs and have also worked on pieces outside of my regular comfort zone. Taking on pieces like a letter from a dying grandmother to her very young granddaughter, to writing a piece in the third person about a chemically crafted blight that instead of just affecting the plants it was supposed to affect took out half the world’s population, and those working in the project being secretly taken out for their time.  Both for me were very different from my usual topics and style and I like them both very much. The best, though… I don’t know that I really could pick one.  But if I did, I think it would be In the Darkenss, the one about the new vampire. If only because who does not love a good vampire tale?

The process… ideas in the moment. I guess I couldn’t really tell you. All I know for certain is that there is this deep well of stories meant to be told and as writer’s all we need ever do is pull up the bucket and let the well spring over! I am nothing but a conduit for the stories to tell themselves.

I will have to take into deep thought and consideration your words on the Magic Vial. But I will leave you with this, Jin was chosen on purpose, for he is a Djinn of sorts at least that was what he was to represent.  And the prompt that inspired the piece was: I stared at the deep purple vial he twisted between his fingers and resisted the urge to reach out and snatch it from his filthy hands.

Questions are the whole reason we started this endeavor, so I leave you with one in return, what then going forward is your burning answers? What is it that inspires the uninspired and tired? Where do we move forward with this new beginning of questionings that answers so much, yet leaves so much unanswered?

And to you my dear readers, I ask you this… what are your burning questions?  Please do ask us, as we follow the muse to wherever it may lead and would love to bring your questions to light and maybe find some answers to our own along the way!  And if you haven’t seen them yet, please check out the anthologies I am published in, the MN Emerging Writers and the National Edition!

and other tidbits of thought

Keeping Up To Date: